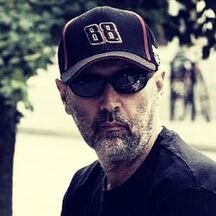 For the past forty years, I have worked in the mining industry in various engineering and environmental capacities. As a hobby, an interest in art drew me to painting and especially pen and ink work. The pen and ink drawings provided an opportunity for me. This, as a staff artist for two different magazines in the early 1990s. Both periodicals, Relix and Unbroken Chain, covered the music of the Grateful Dead and other rock bands. Myself, my wife, and various friends traveled all along the east coast to see them quite a few times for a number of years. It was... an experience, to say the least.

And I have always enjoyed reading, and had an interest in writing.

Good writing--John Steinbeck, Kurt Vonnegut, George Orwell, Shirley Jackson, Mark Twain, Jack Kerouac, Stephen King, J.D. Salinger, Ray Bradbury, Joan Didion, Aldous Huxley--these, and others, showed me at a young age that, a reader can be drawn into a story with mere words... that good writing can transport us to other places.

Writing. The process of putting words on paper. It sounds easy enough. It's something that many aspire to, few actually attempt, and even fewer succeed at. The odds are not good. But, I have a day job. That allows me the luxury of writing as only a hobby. I don't have to succeed. I only need the will to do it. And so I do.  My first two novels, The Foxfire Terror and Remember A Day, are available on Amazon. A collection of horror short stories, Deviation, was released Christmas Day, 2020. I am currently working on a fourth and a fifth book (both at the same time), Hallucina, another collection of horror/sci-fi stories, and Terminus Flux, a dark, futuristic story.

At a much older age than most, I decided I wanted to be a writer. So for now, good or bad, I'm trying. Anyone can do it. Anyone. Writing is one thing, being successful at it is another. So, even if I can only do the former, and never see the latter, I still enjoy it.